Welcome to This Month in Graph Indexing where we look back at the last month and highlight the most interesting happenings in The Graph Indexer community.

We now have a Twitter Page, and our own Youtube Channel, and it’s only gonna get better from here

Be sure to follow and subscribe to our new pages, in order to stay tuned with all the protocol news and more!

Share your videos with friends, family, and the world

All the new IOH videos will be posted to the new YouTube channel from now on, so make sure you subscribe!

Be sure to upgrade your nodes and check out the full release notes here:

Join the world’s brightest dreamers & doers for a full day focused on web3, dapps, protocols, and the future of the internet. Hear from leading protocol and dapp developers as they showcase how the web3 community is pioneering brand new forms of human coordination. Inspiration from action-oriented talks will follow you all day long into an energetic evening of celebration, as the future of the web3 stack is unveiled at the historic Palace of Fine Arts in San Francisco.

Web3 is reshaping the internet. Be a part of the change this year at Graph Day—get your ticket now.

Whether you are a network participant or want to learn how to use GRT in the network, check out the recording to learn all about the latest updates in The Graph ecosystem.

Check it out here

In Community Talk #10 we listen to Oceanpoint’s experience transitioning from a centralized service to The Graph, get wave 5 grant updates, learn about Graph Advocates DAO, hear experiences of current graph advocates and get a breakdown of the recently released R&D roadmap.

Detailed notes regarding each topic with timestamps can be found below:

How to Migrate Your Ethereum Subgraph to the Decentralized Network: A Step-by-Step Guide

Ethereum subgraphs continue to migrate to The Graph’s decentralized network. As web3 adoption grows, so does demand for scale and performance. Developers are faced with a major decision: to continue to rely on centralized tech or to switch to decentralized infrastructure.

For longevity and reliability, nothing beats decentralization. By eschewing centralized points of failure, you are offering your users a web3 app they can access consistently. Many projects have already validated the network in production and now is the perfect time for your project to migrate over.

To help you migrate, The Graph Foundation has put together a step-by-step guide.

Check it out here:

How to Migrate Your Subgraph to the Decentralized Network: A Step-by-Step Guide

Benefit from better reliability and faster performance on The Graph’s decentralized network.

The Graph Foundation Allocates $1.25M in Wave 5 of Grants, Marking Over One Year of Grants

A year after launching the grants program, with nearly $12 million already allocated, Wave 5 is now complete! Continuing its mandate to support The Graph ecosystem into 2022 and beyond, The Graph Foundation is excited to announce the allocation of $1.25 million in this latest wave to a diverse group of over 30 grantees to continue the evolution of the ecosystem by improving the protocol, supporting dapps building on The Graph, creating new tools and growing the community. Bolstering decentralization in the community also remains a top objective, as the protocol scales and more participants join the ecosystem.

If you have ideas for Wave 6 make sure to apply for a grant - the application portal is always open!

Read more about the 5th wave of Graph Grants here:

The Graph Foundation Allocates $1.25M in Wave 5 of Grants

On the first anniversary since launching its grants program, The Graph Foundation is pleased to award over $1.25 million in Wave 5 of ecosystem-expanding grants.

The Graph AdvocatesDAO has been launched

The DAO launched with 20 members who were part of the initial cohort of the Advocates Program and received a grant from The Graph Council for $250,000 worth of GRT to seed the treasury. In addition to community grants, the DAO treasury is expected to be used to compensate DAO members who contribute to the DAO itself and to fund reimbursements for Advocates activities.

**Apply now to become an Advocate and get involved with the DAO!**

The DAO will also be The Graph ecosystem’s first step in expanding decentralized oversight of grants programs. Since the launch of the network, community grants have been overseen by The Graph Foundation and Council with over $1M in community grants distributed in 2021. Community grants will now be shepherded by the Graph AdvocatesDAO.

Below is a list of resources to get engaged with the Graph AdvocatesDAO:

The Graph AdvocatesDAO marks just the beginning of many waves of expanded decentralized governance to come! Community members are already beginning work on more DAOs and initiatives to deliver The Graph’s vision for a decentralized web3.

The Graph ecosystem launches its first DAO to lead community grants and manage the Advocates Program, to onboard the next wave of web3 contributors.

Episode 58: Today I am speaking with Vince Petoscia, an Indexer at The Graph. Vince’s Indexer operation, Nodify, is a newer and up-and-coming Indexer, and I was interested in asking him about the experience of starting an Indexer and going to work in The Graph. For anyone active in the community, then you probably recognized the approach Vince took when he launched – he was active and present all throughout the community, including hosting a special Reddit AMA on indexing.

As you will hear, for Vince, becoming an Indexer at The Graph is a story about starting a new career, pursuing a passion, and, at its heart, the tale of an entrepreneurial journey into Web3. I’m incredibly grateful to Vince for being willing to share his story and I hope Vince’s story helps shines a light on the path newer and smaller Indexers take to contribute in The Graph, along with their commitment to the community and Web3.

Episode 60: Today I’m speaking with Dan Enright, an Indexer at The Graph. Dan’s Indexer operation is called Blocksteady and he joined me from his home in Australia.

If you have listened to recent episodes of the podcast, then you know I am interested in telling the stories of smaller Indexers participating in The Graph. I’m doing this for a variety of reasons, but the primary intention is to shine a light on the stories and the people behind Indexer operations that might get overlooked by Delegators and The Graph community because they are smaller or because they are newer.

As you will hear, Dan will share a familiar story – someone who changed careers, stepped into the entrepreneur’s journey, and landed in The Graph protocol. Dan’s background is very interesting, beginning with a career in design and gaming, and then moving into the banking industry as a business analyst.

And like many of you, Dan’s entry into crypto and, ultimately The Graph, has the familiar themes of serendipity, hard work, and passion for working on something that can impact the world.

Today I’m speaking with Kent Fourie, Co-Founder and CTO at Graphrica, a community hub based in Africa for high-level Web3 development talent to share ideas, problems, and opportunities that support each other and leapfrog the African continent forward. Graphrica – a name that combines The Graph and Africa – is also the leading community of The Graph in Africa.

As you are about to hear, Kent is incredibly passionate about web3, The Graph, and the African continent. Kent has a technical background coupled with a unique ability to explain complex topics and ideas. During our conversation, Kent shares many ideas, from finding his way into web3, his optimism for blockchain and Africa, and we also explore several concepts, such as mining, subgraphs, Graph Grants, and the future of The Graph.

Web3 and Building a Better Internet with Joseph Al-Chaimi

This week The Index host, Alex Kehaya, speaks with Joseph Al-Chami, a Product Manager at Figment, one of the world’s largest blockchain infrastructure providers and core developers for the Graph.

Joseph’s career in Blockchain and Web3 technologies started when he won a blockchain challenge at a FinTech competition while a mathematics student at the University of Montreal. Although this competition launched Joseph’s career in blockchain technology, his interest in Web3 and Blockchain infrastructure began when he was the president of the University of Montreal’s student-run coffee shop. Joseph asked his fellow students to volunteer their time working to keep operating costs low at the coffee shop. Joseph had to create incentive and slashing mechanisms for the volunteer workers to sustain this.

This idea of community and building something for the greater good attracted Joseph to Figment and their products, which work to empower developers to grow Web3 ecosystems. Joseph notes, “Web3 is being built by missionaries, Web2 by mercenaries.” He holds this ideal close to his heart and seeks to do things differently from his Silicon Valley counterparts. In other words, make the world a better place for all and not just for the few.

Joseph believes that this standard starts with more development in Web3. One of the most significant projects at Figment is the development of Web3 infrastructure through community engagement. Figment currently offers “self-build” education to support developers transitioning from Web2 to Web3. Taking a page out of his university coffee shop playbook, Joseph has also introduced a token incentive system to attract more developers to the program and support the growth of Web3 ecosystems. This eventually turned into ‘The Builder DAO,’ a co-op project launched in partnership with The Graph, Pyth, Solana, and other community contributors.

Figment is one of five core development teams working with The Graph, a decentralized indexing protocol for querying networks such as Ethereum and IPFS. Figment’s development team is currently focused on integrating the current technology of The Graph to different chains such as The Cosmos Hub. Figment also utilizes the Graph to leverage Blockchain data to support DataHub better, another Figment project that aims to provide developers with Web3 protocols.

Listen to Alex Kehaya’s full interview with Joseph Al-Chami to learn more about Figment, and their efforts to expand Web3 ecosystems. The podcast is available for download via Apple, Spotify, and other major streaming platforms. 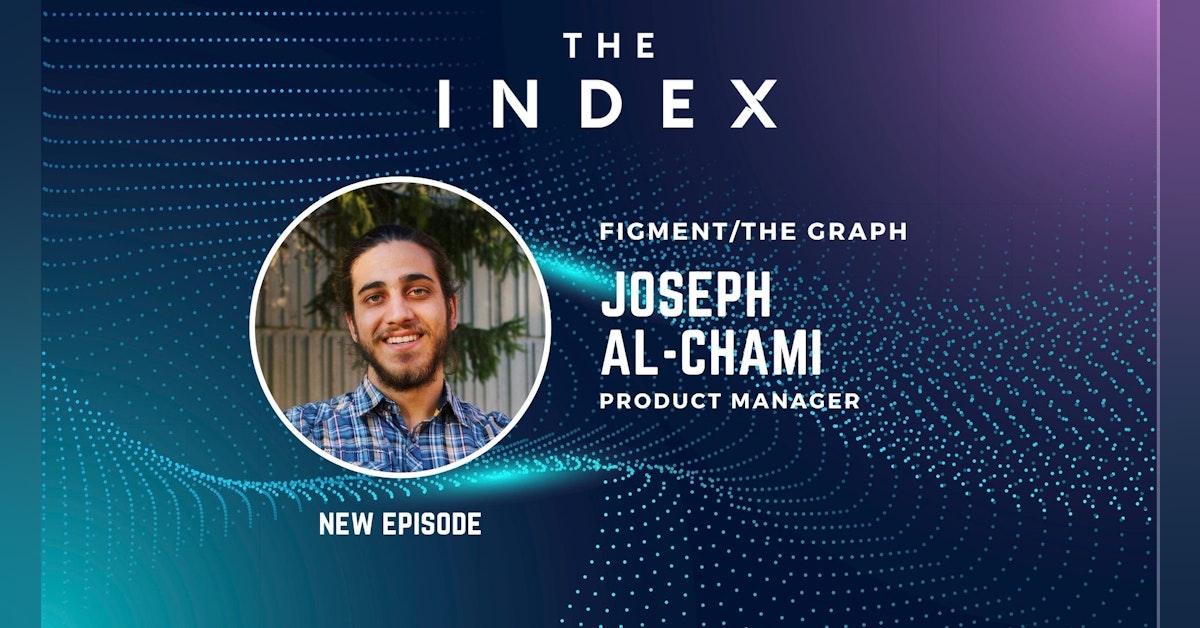 Web3 and Building a Better Internet with Joseph Al-Chaimi

This week The Index host, Alex Kehaya, speaks with Joseph Al-Chami, a Product Manager at Figment, one of the world's largest blockchain infrastructure pr…

I appreciate these write ups so much. Thanks @indexer_payne!

Thank you so much for this report

Thank you @indexer_payne, I always look forward to these!